The DF engine concept by itself is based on fuel redundancy. In addition, WECS 8000 is totally distributed, in order to split up functionality and make boundaries between the categories control and monitoring, but also to build natural redundancy into the system. This means that redundancy control strategies are utilised, in the event of a main sensor/component failure.

It handles all strategic functionality related to operation both on gas and diesel fuel (such as electronically controlled gas admission and pilot fuel injection, diesel actuator control, engine safety and fuel switch-over logic).

All the modules communicate with each other via an inter-module communication bus based on the CAN protocol. CAN is a communication bus specifically developed for compact local networks, where high speed data transfer and safety are of very high importance.

Some safety critical back-up features such as overspeed protection is handled by the relay module (discrete cabling). 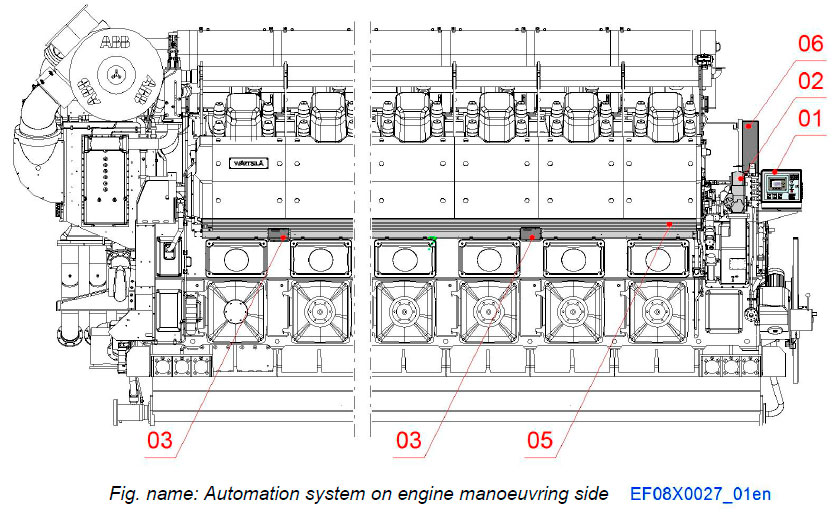 The WECS 8000 system is a fully integrated engine management system, designed for harsh environments. The engine-built system handles all necessary monitoring- and strategic control features needed on a DF engine. The system architecture is based on distributed electronic modules, thus the measurements and controls are occurring where locally needed on the engine. The functionality of WECS 8000 comprises the following main categories: 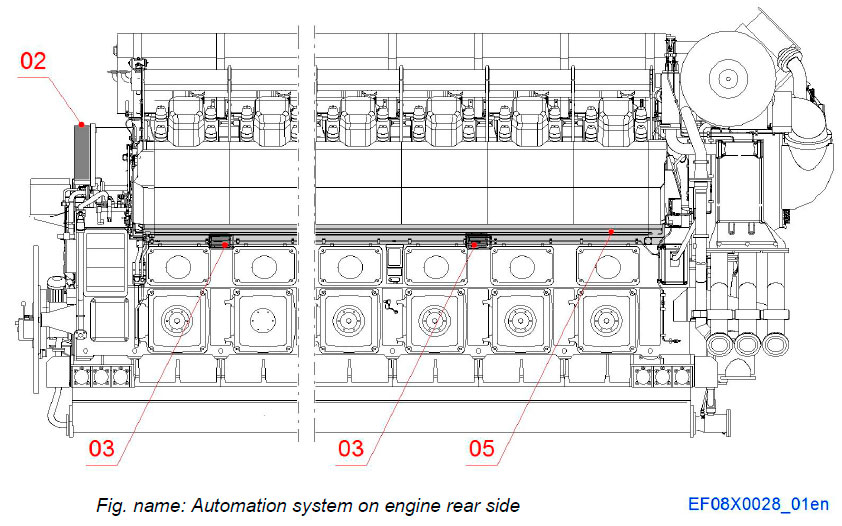 Some safety critical back-up control functions are handled over hardwired point-to-point wiring, and with a separate back-up module. 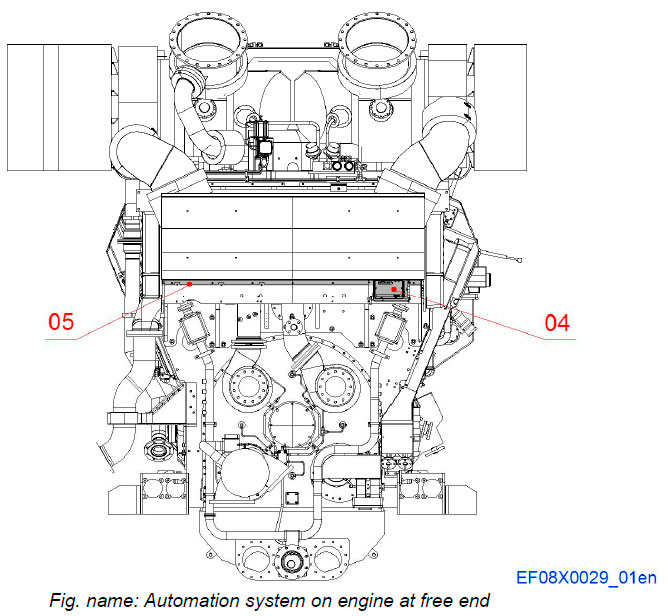 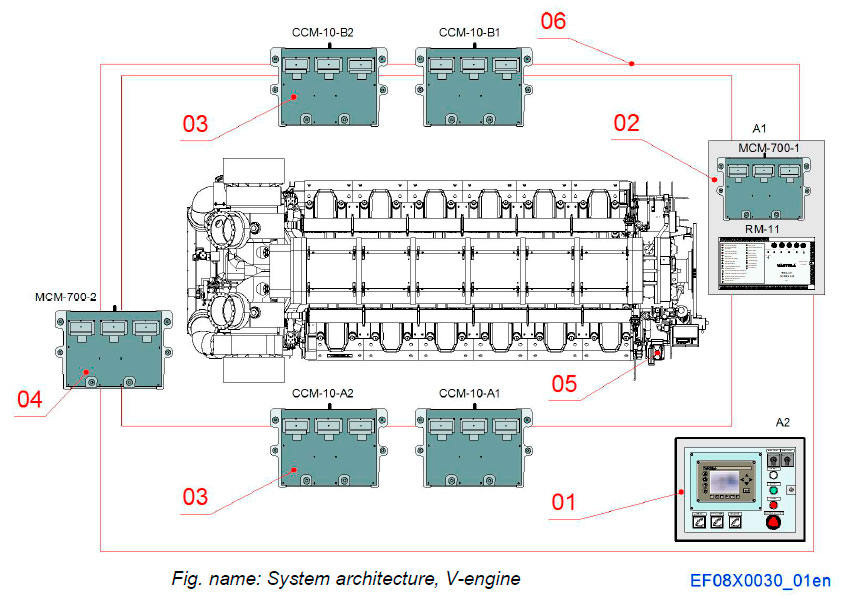 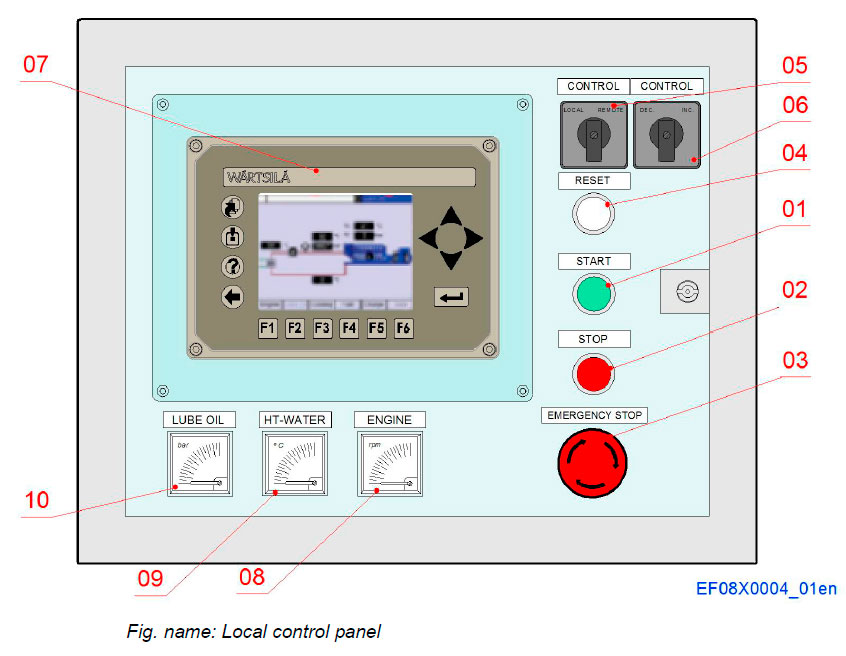 There is a local control panel on the engine, where most engine measurements and statuses can be monitored, and where the local push buttons and selector switches are located. For viewing of the engine parameters, there is an electronic LDU (Local Display Unit) used, with a number of menus and menu selection buttons. Mechanical back-up instruments for engine speed, HT water temperature and lubricating oil pressure are also arranged. The local push buttons and switches are the following: 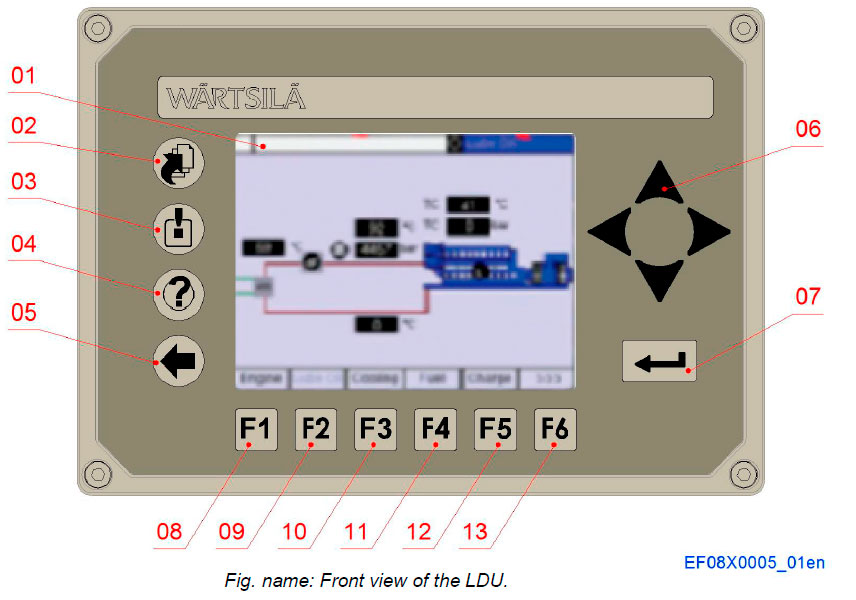 The LDU replaces the traditional pressure gauge panel, thermometers and other engine instruments. The LDU is connected to the main control module over the CAN bus, over which it receives all data to be displayed. The graphic display has a number of different pages (menus), and integrated key buttons for activation of these pages. 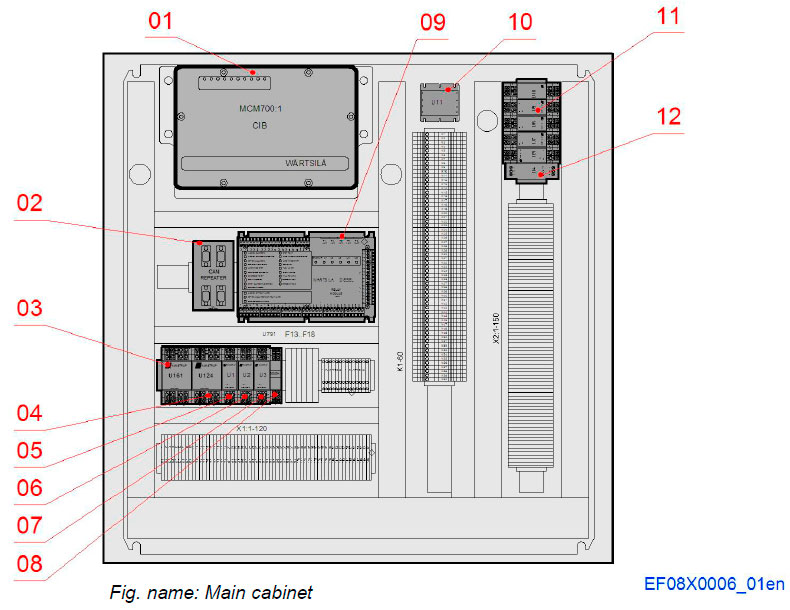 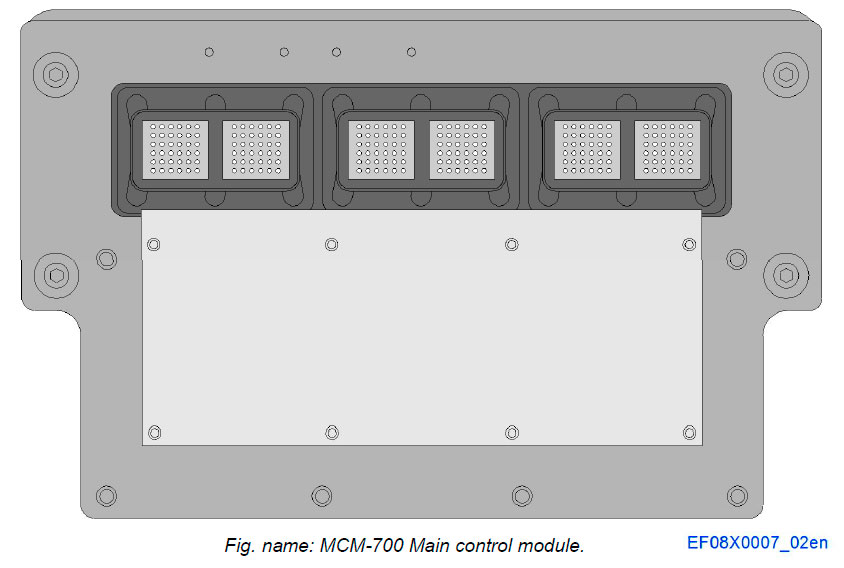 This module is the master in the WECS 8000 system. It handles the processing of all strategic engine control functions. The main processes are the engine start- & stop sequences, engine safety, and the combustion control.

Calculations are made based on the internal speed/load control algorithms, gas pressure, gas admission and pilot fuel injection/timing. It handles the information sent by all other modules, and it sends reference signals to the cylinder control modules about gas admission, pilot fuel quantity and timing etc. It also communicates with systems external to the engine itself. A second MCM-700 module is also part of the system (at free end), exclusively for collecting of sensor signals and for control of the waste gate. 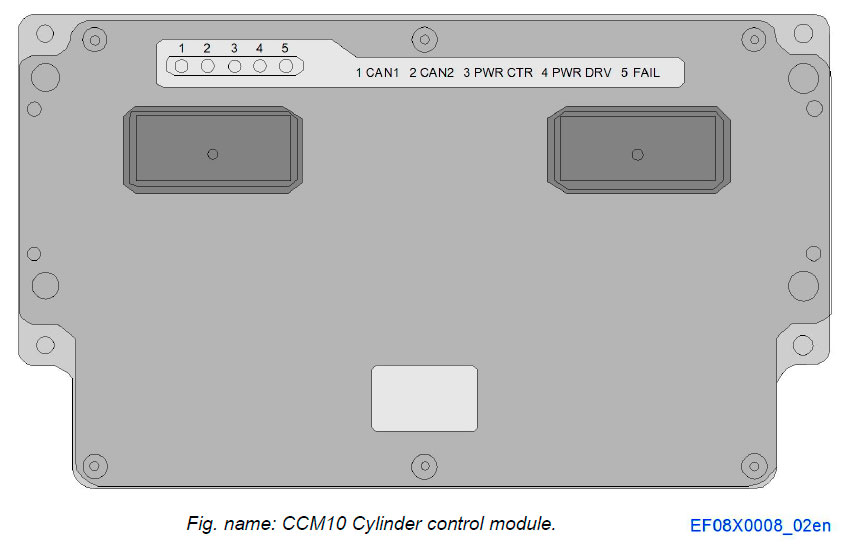 This hydraulic-mechanical actuator is used in diesel- and back-up operating mode, for control of the fuel rack of the engine. The actuator receives a control signal from WECS 8000 main control module (via a current converter), and sets the fuel rack position accordingly. 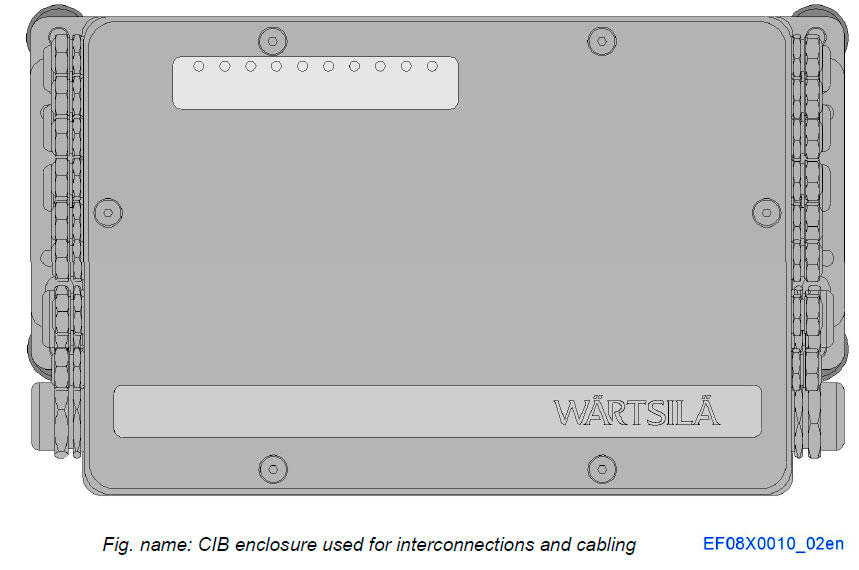 Interconnections and cabling on the engine is utilizing a so called cabling interface box, CIB, which is acting as an interface between the control modules and their peripheral devices.

The CIB is a robust construction mounted on top of the control modules, it’s equipped with cable glands for the out-going cables and with multi-pin connectors for mating to the control module. Internally there is a printed circuit board containing spring loaded terminal strips, test connections, terminal resistors etc.

Screened, special cables for the demanding engine environment are used for all equipment. Control modules are interconnected with a special multi-bus cable, including power supply (24V), engine speed, engine phase, safety wire loop and CAN-bus, all doubled for redundancy reasons. 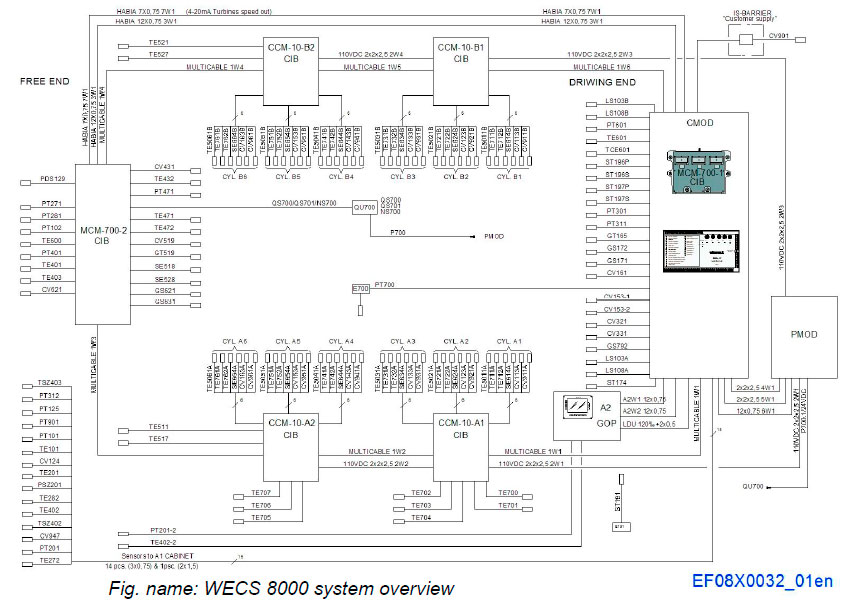 An overview of the entire cabling of the DF engine, including references to each sensor. 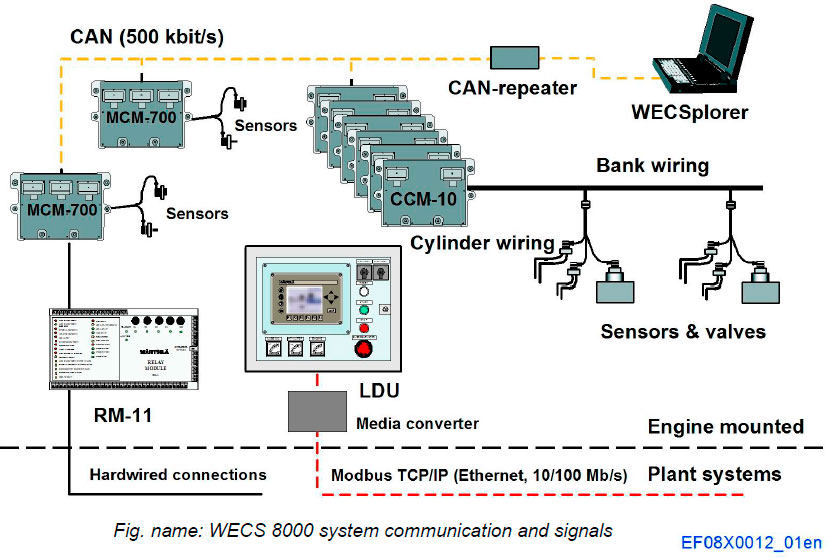 WECS 8000 is a distributed system, where all the electronic modules communicate over the CAN-bus with each other. The system collects signals from various sensors at different locations on the engine, connected to locally mounted modules. The signals received are processed and compared with the control parameters given for all the active engine processes. 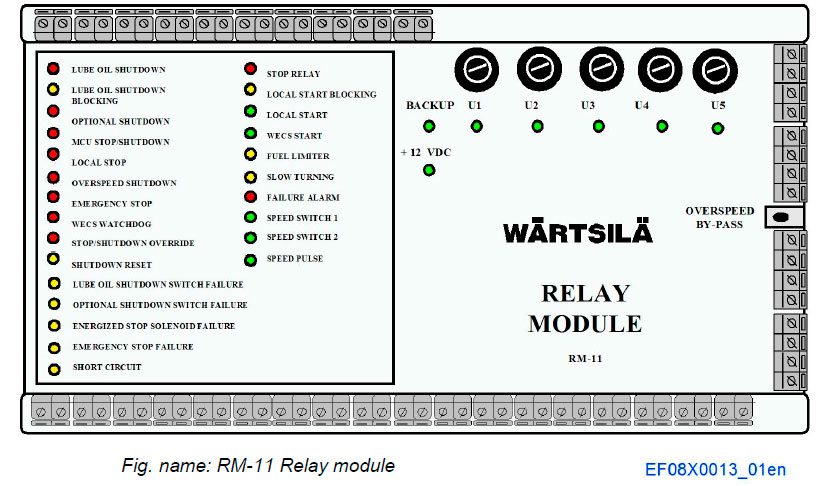 Unlike other parts of WECS, the RM-11 relay module electronics is based on analogue circuit technology (no microprocessor). The relay module, which is located in main cabinet A1, handles a number of back-up safety related functions on the engine. It also constitutes the hardwired interface between the main control module and the startslowturning-& stop solenoids of the engines, and partly also to the external systems.

Critical parameters such as engine speed, lubricating oil pressure and HT water temperature are monitored in this module, and in case of abnormal levels, a shutdown is initiated and controlled from this module, independently of the main control module. The relay module is located in the main cabinet of the engine and LED’s on it indicate the status of each input/output of it. Also all supply voltages have their own LED. 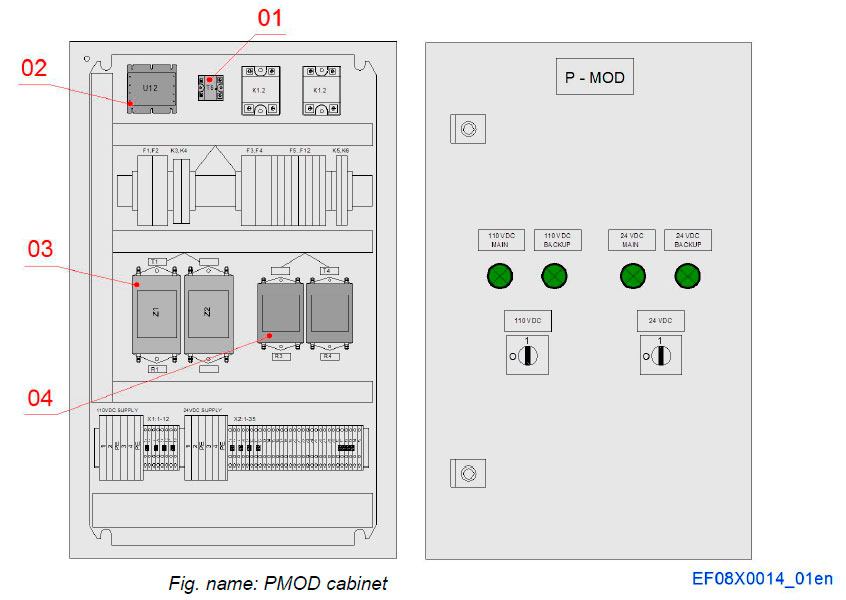 The power module (PMOD) is a separate cabinet on the engine, that handles the power distribution and filtration within the WECS 8000 system. On the front of the cabinet, there are separate switches for disconnection of the 24 VDC system and the 110 VDC system. Both the main and the back-up voltages for both these DC-systems have green lamps on the front of the PMOD cabinet, for indication of presence of input voltage. 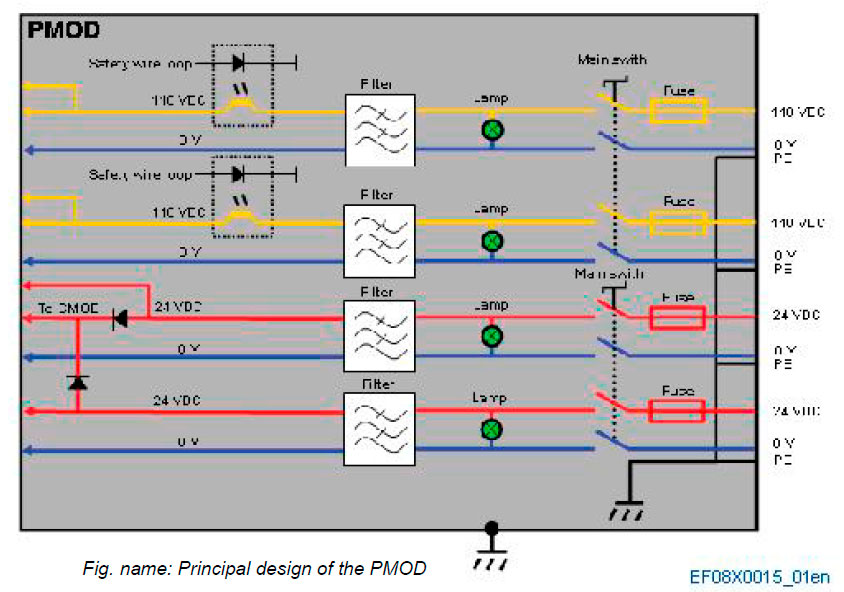 The external 24 VDC power supply enters the PMOD via two separate inputs. The two 24 VDC power supplies are via diodes inside PMOD connected to an EMC-filter. There are separate distribution lines from the PMOD to each submodule, all having an individual fuse.

A separate voltage of 110 VDC is in WECS 8000 used as drive voltage for the high energy solenoids (both gas admission valves and pilot fuel inj. valves). The external 110VDC power supply enters the PMOD via two separate inputs. The two 110 VDC power supplies are via diodes inside the PMOD connected together into one single supply. This supply is then via a bi-directional EMC filter and a fuse connected to the cylinder controllers.

The power supply lines are “looped” around the engine, to provide safe supply in case of a single point wire break. Beside figure which shows this distribution principle.

This signal repeater extends and isolates galvanically the CAN-bus outside the engine. This external interface is to be connected to an external configuration, calibration & diagnostic tool (PC program), used by authorised personnel only. The transfer rate is 500 kbit/s.

This converter is used to convert the external communication bus signal (Modbus TCP/IP) from an electrical signal (from LDU) to a signal transferred optically through an optical fibre (to plant automation system). The transfer rate adapts itself according to the device used externally to the engine, and will be either 10 Mb/s or 100 Mb/s. 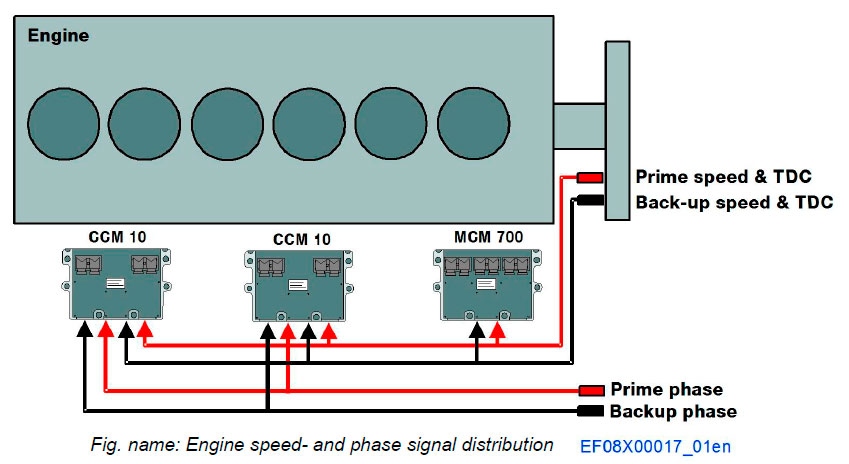 The engine speed is measured, based on the signal from two speed sensors. Both speed sensors are connected directly to the main control module (MCM-700), where the speed calculation is carried out in.

For the gas admission- and pilot injection timing processing, the cylinder control modules (CCM-10) need accurate information about the engine speed and engine angular position. Therefore the engine speed- and phase signals are connected to each cylinder control module, for this calculation. These signals are hard-wired to each module, i.e. not transferred as data over CAN. 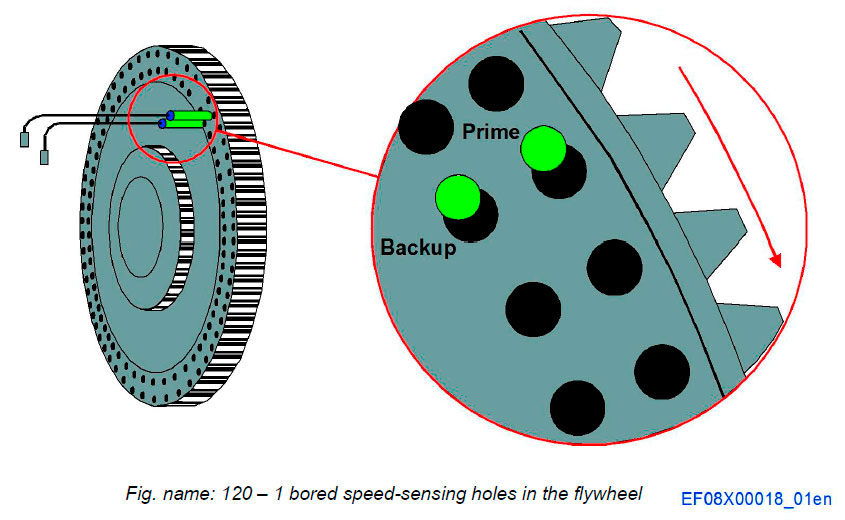 As WECS 8000 must detect the accurate engine angular position, one missing hole is arranged in both speed sensing hole-peripheries on the flywheel, i.e. the pulse train will contain one missing pulse for each engine revolution. The angular locations of the missing holes are such, that the end-edge (= positive electrical flank) of the hole coming after the missing hole, is accurately at TDC (Top Dead Centre) of cylinder (A)1. The speed sensors use separate holes, but the holes are “in parallel”, thus the phase difference between the two signals is negligible. The number of holes is 120 minus the missing one, i.e. 120 – 1. 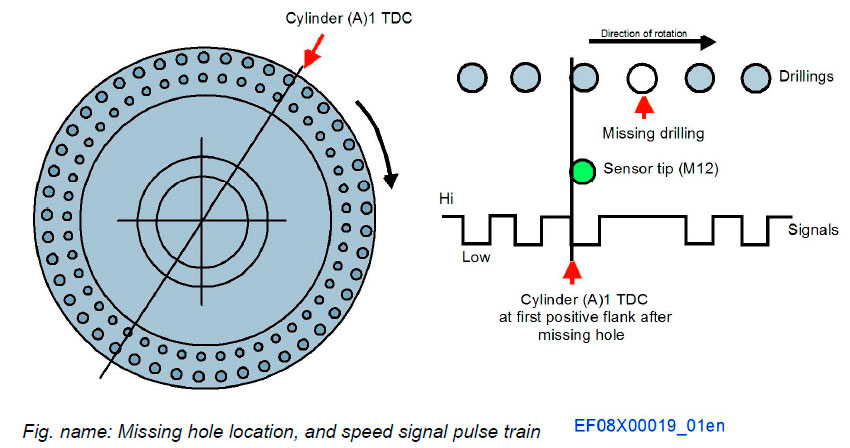 As the engines controlled by WECS 8000 are 4-stroke engines, the crankshaft and thereby flywheel will make two revolutions for one complete engine cycle. To detect which TDC marker signal (missing pulse) belongs to the working phase of cylinder A(1), also engine phase detection is needed. Two phase sensors are provided of redundancy reasons. These sensors are mounted at the driving end of the camshaft of the engine. These sensors are PNP-type proximity switches.

The phase sensors are detecting the “phase” of the engine by means of detecting the position of a “halfmoon” disc, attached to the driving end of the camshaft. This disc is mounted in such a way, that a positive edge (signal going high) will occur 180° BTDC of cyl. (A)1, and will remain high until 180° ATDC for the same cylinder, see picture below. Based on whether the phase signal is high (24 VDC) or low (0 VDC) when the missing pulse comes, WECS can exclude the false missing pulse. Only the missing transition coming while the phase signal is high, is in WECS defined as true. 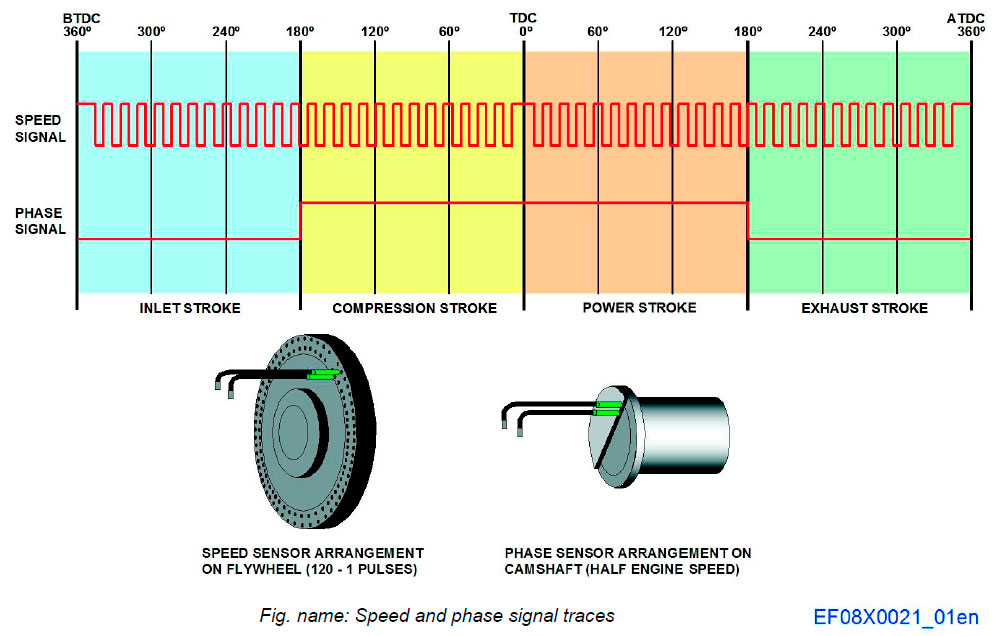 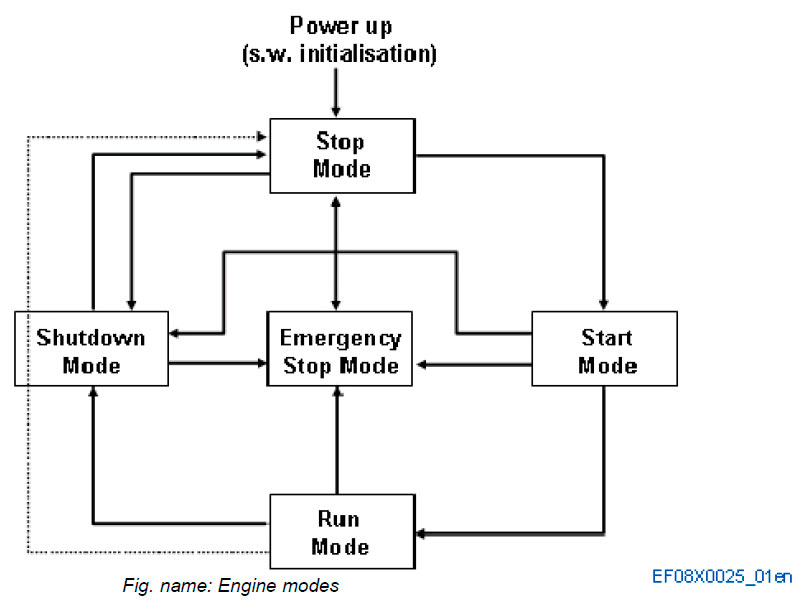 The WECS 8000 engine management system controls and monitors the engine parameters and initiates all required actions in different situations.

These actions can vary from giving an alarm to the operator, to shutting down the engine. Depending on the status of the engine, there are a number of parameters controlled. E.g. when the engine is stopped, it is not valid to create alarms for cooling water pressure. Therefore alarms need to be suppressed under certain conditions. WECS 8000 has because of this and other reasons a number of modes. Different modes have different priority, and the mode changes can occur only according to predefined rules.

WECS 8000 performs a number of continuous control processes on the engine, when the engine is in run mode. Below, a brief description of each of these processes.

PROCESSES CAN BE DIVIDED INTO CATEGORIES

The actual gas pressure is measured on the engine and compared to the reference pressure. The amount of main gas admitted to each cylinder is controlled by the cylinder individual gas valves, which are actuated by the cylinder control modules. The amount of gas admitted depends on the gas supply pressure and the time the main gas solenoid valve is open (duration). The gas fuel is admitted further away or closer to the TDC by changing the main gas solenoid valve opening moment (timing) in order to obtain an optimal air/gas mixture. The WECS 8000 system uses pre-set (map) values to optimise this mixture during engine operation. Valve duration and timing references are sent to the cylinder control modules from the main control module over the CANbus. 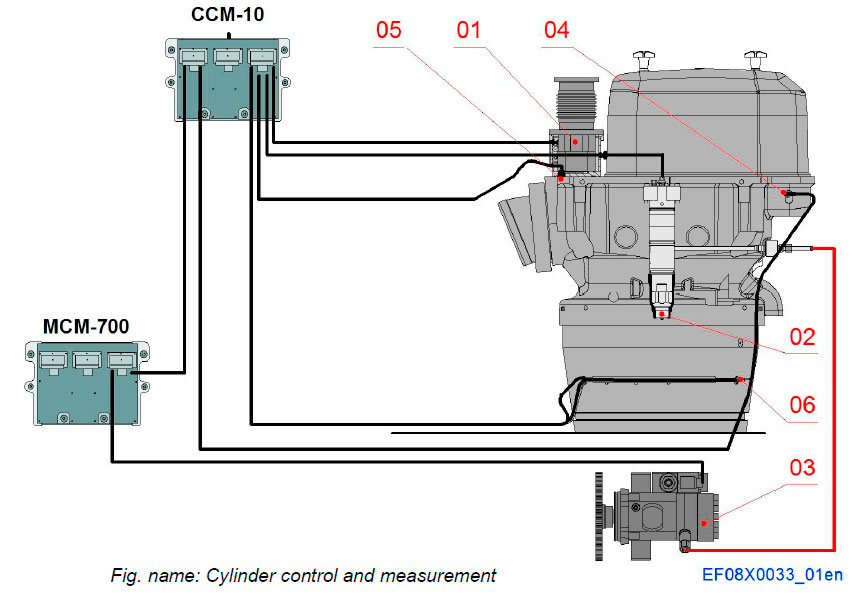 An even gas admission duration setting for all gas admission valves will not result in exactly the same gas quantity in all cylinders, due to the geometry of the engine and due to some deviations in the gas valve performance. This slight disparity is handled with the cylinder balancing control. 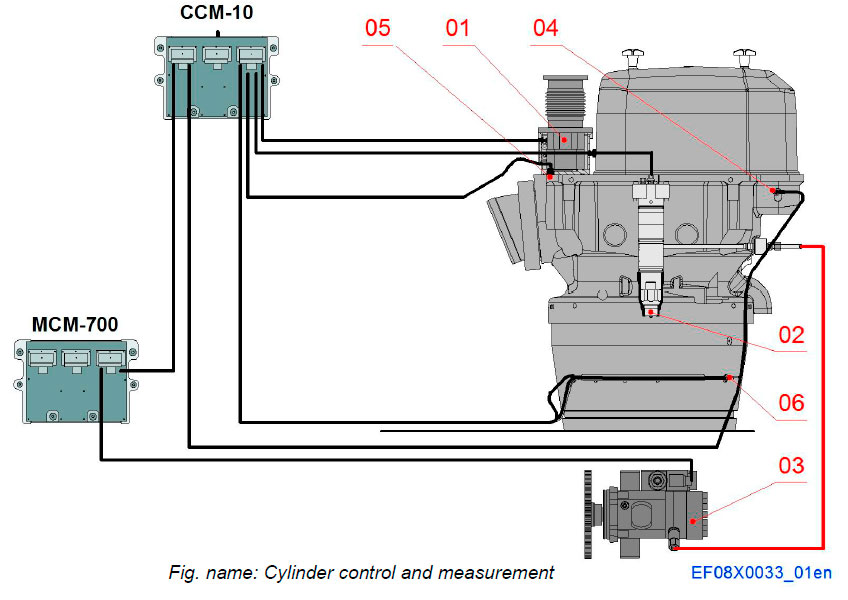 The main control module compares each cylinder’s exhaust gas temperature with the average exhaust gas temperature of the entire engine, and adjusts the duration of the individual gas valves with an offset, in order to minimise the deviation. There are limitations for the maximum adjustment available in order to prevent that possible component failures cause a too rich or too lean gas/air mixture.

The knock control algorithm of WECS 8000 will also affect the gas admission duration.

If the engine is in gas operating mode, and the load level is above approximately 15 % (tuneable) a cylinder knock based control will enable. Light knock in any cylinder will immediately result in a slight reduction of the quantity of gas injected into that cylinder.

In order to maintain the same engine load level, the speed/load controller will automatically increase the gas admission into other cylinders. When the situation normalises in the cylinder, the gas admission will slowly be restored to the original setting. 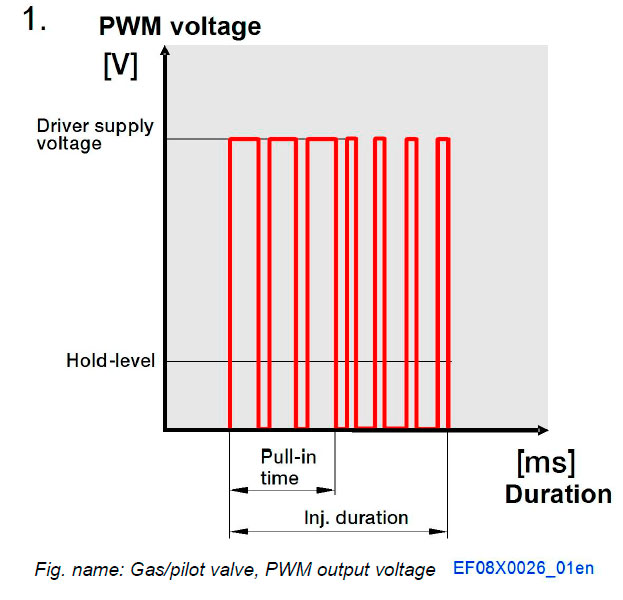 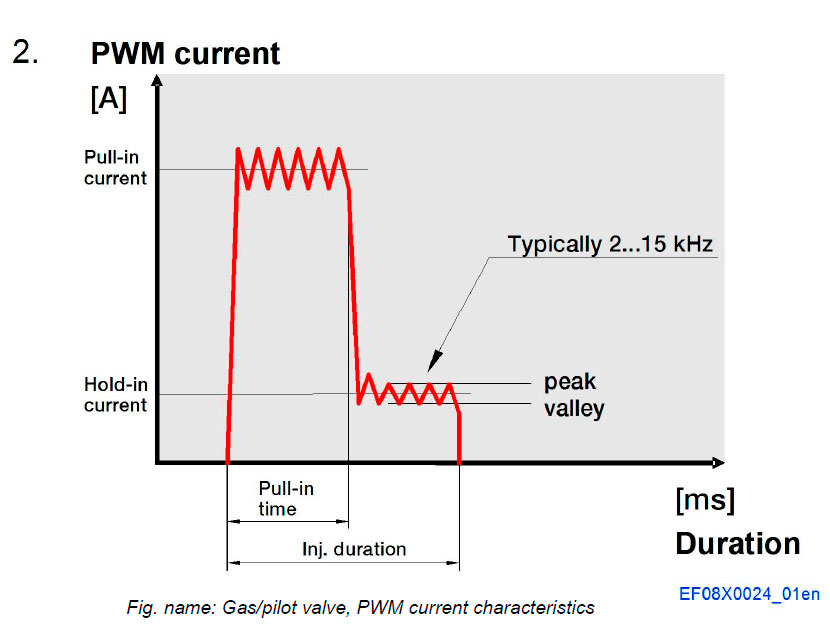